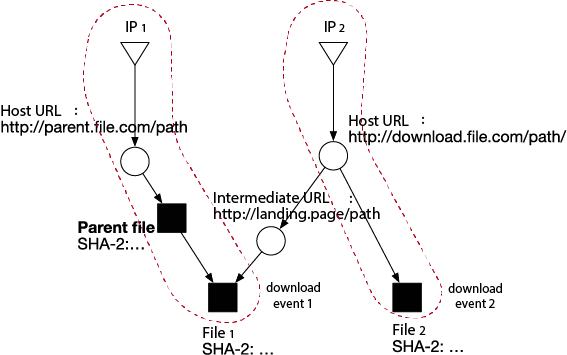 The data was sampled over the course of a year (Figure 1). We then used a graph analysis approach to characterize the structural relationships between downloaded files and their providers (dropper files, host URLs, and IP addresses – see example in Figure 2).

Here are the overall statistics relating to the snapshot and longitudinal analyses:

Longitudinal analysis: In total, there are 21.3M unique files, 12.4M unique URLs, and 553K unique IP addresses in the dataset, which are generated from 129M download events. We generated 78 graph snapshots corresponding to the sampled period between October 2015 and September 2016.

Our first key finding was the presence of a massive delivery infrastructure, which corresponded to the Giant Component (GC) – the largest connected component in any graph. However, the GC was inordinately larger than any other component in this graph. In raw numbers, this Giant Component comprised of 1.3M nodes and 1.6M edges and accounted for over 80% of suspicious downloads. There were 58K other connected components of isolated download activities (the non-Giant Component subgraph, or NGC), with the next largest consisting of only 2K nodes. In real terms, this GC either represented one massive delivery operation or a well-connected marketplace of infrastructure providers. Given prior research on the cybercriminal economy and the illegal services that are traded between them, the latter is the more likely explanation. Either way, as the data suggests, we can confidently rule out malware delivery mostly being a set of vertically integrated operations, i.e., actors carrying out the entire process of malware delivery (from malware development all the way to monetizing victim computers and stolen information) by themselves.

We conducted several graph percolation experiments to test the robustness of this structure by sequentially removing its most influential nodes until it completely disintegrates. In essence, we found that multiple types of nodes contributed significantly to the connectivity of the GC: totally removing IP addresses accounted for a 31% loss in size, while completely removing all server-side nodes (URLs, IPs) left a file-only structure 20% the size of the original GC, but still 90 times larger than the next largest component (2K nodes) in the overall graph. We also found that the GC was stable, persisting over the course of the entire year.

Finally, we found that within these “most influential” nodes of the GC structure, over two-thirds of the IP nodes were based in the United States, while many of the top effective second-level domains (e2LDs) were well-known, benign CDNs and cloud service providers, including MediaFire, Windows Azure, Softonic, and Google. From an action point of view, these could be pointers to where Internet service provider (ISP) takedowns or increased security hygiene pressure should be focused to disrupt the global suspicious file delivery ecosystem most effectively.

Continue to the second part of this article →