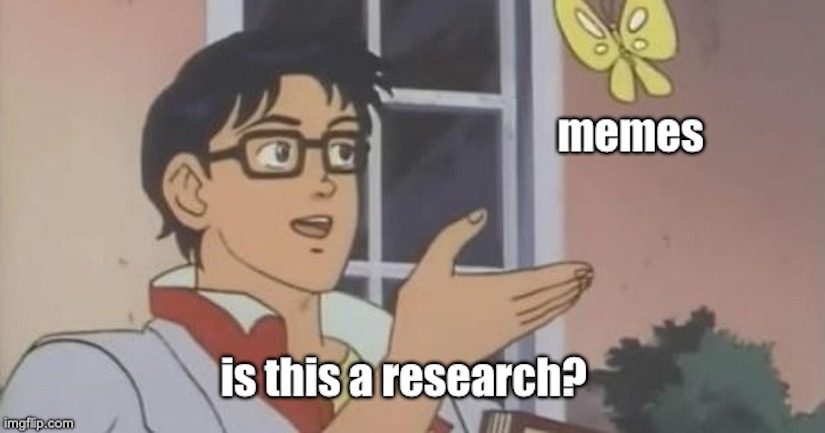 (And by the way, we’re happy to report that our work received the Distinguished Paper Award from the 2018 ACM Internet Measurement Conference!)

Our study uses images posted on Twitter, Reddit, 4chan, and Gab. (The latter is a Twitter-like social network positioning itself as a “champion” of free speech, providing shelter to users banned from other platforms—you might have heard of Gab in the context of the Pittsburgh Synagogue Shooting). We group visually similar images, using a technique called perceptual hashing.

Then, we identify groups of images that belong to the same meme and annotate them using “metadata” obtained from Know Your Meme, which is a comprehensive online encyclopedia of memes.

This approach allows us to analyze different social networks through the lens of “their” memes. What we found was very revealing (and, at times, disturbing). Fringe social networks like /pol/ and Gab share hateful and racist memes at an impressive rate, producing countless variants of antisemitic and pro-nazi memes like the Happy Merchant, or including some version of Adolf Hitler in other images. Memes like Pepe the Frog and its variants are often used in conjunction with other memes to incite hate or influence public opinion on world events (e.g., ISIS or Brexit).

Also, fringe Web communities have the power to twist the meaning of specific memes, change their target context, and make them go viral on mainstream communities. A perfect example is the NPC meme, which refers to non-playable characters in video games that are controlled by computers. This meme was pushed on Twitter by 4chan and Reddit users in September 2018 and used in the political spectrum by referring to liberals as NPCs (i.e., people that have no critical thinking, bound by unchangeable programming, and are manipulated by others).

Looking at Web communities in isolation only provides a limited view of the meme ecosystem. Communities do influence each other: memes posted on one are often re-posted on another. So how can we measure the interplay between Web communities and quantify their reciprocal influence?

We turn to statistical models known as Hawkes processes, which let us say with confidence that a particular event is caused by a previous event. That is, we can be confident that an event on /pol/ (i.e., posting a meme) resulted on an event on Twitter (i.e., the same meme is posted on Twitter), thus denoting influence from 4chan to Twitter. This way, we can model the influence of the various platforms, since they are not independent: each one is influenced by the others as well as the greater Web.

We find that /pol/ is by far the most influential disseminator of memes in terms of the raw number of memes originating from it. In particular, it is more influential in spreading racist and political memes. However, The_Donald subreddit is actually the most “efficient” at spreading these memes onto other fringe social networks as well as mainstream ones like Twitter.

While most memes are generally ironic in nature, used with no bad intentions, others have assumed negative or hateful connotations, including outright racist and aggressive undertones. These memes, often generated by fringe communities, have also become part of political and ideological propaganda. Shedding light on their origins, their propagation, and influence provides our society with a better understanding of the dangers they pose.

We have made our processing pipeline as well as our datasets publicly available on GitHub. We are confident this will allow researchers and social scientists monitor how weaponized memes might influence future elections and the broad political discourse.  For example, we worked with Facebook to help their recent efforts to mitigate manipulation campaigns during the 2018 US Midterm elections. In particular, we provided them, in real-time, with examples of politically motivated memes that were originated from fringe communities. Our work allowed Facebook to gain a better understanding of dangerous memes and monitor their spread through the platform in politically relevant contexts. Overall, our pipeline can be used by mainstream social networks to assist the identification of hateful content, e.g., to automatically identify hateful variants of popular memes (think of “Nazi” Pepe).

Addendum: Memes produced by 4chan in response to our work

Some of the communities we study in the current work have taken an interest in our previous work. 4chan’s /pol/ has taken a particular interest, providing additional evidence to the community’s meme creating “ability.” (Read more about 4chan and their reaction to our work in a previous article – A Longitudinal Measurement Study of 4chan’s Politically Incorrect Forum and its Effect on the Web).

This project has received funding from the European Union’s Horizon 2020 Research and Innovation program under the ENCASE project. An edited version of this article was originally published on The Conversation, written by Emiliano De Cristofaro.