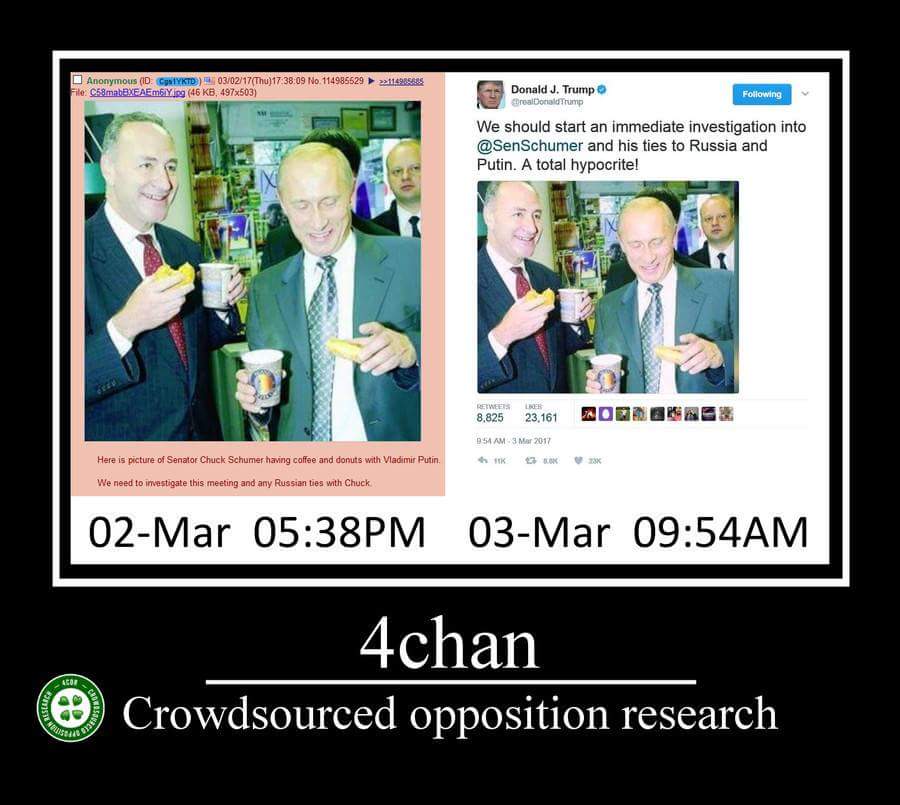 To address this, we used a cool statistical model known as Hawkes processes. There’s a more technical treatment in our paper, but imagine users on Reddit, 4chan, and Twitter as part of systems that are stimulated and respond by posting URLs. There are a variety of stimuli these systems respond to. From organic discovery of URLs via surfing, to seeing a friend share it on Facebook. Sometimes these systems influence each other, for example, Donald Trump posting a video from Reddit’s The_Donald on Twitter. Hawkes processes let us quantify the stimulus-response relationship between different systems, and furthermore, accounts for the influence of other systems that we do not measure, and may not even know about!

Using Hawkes processes, we measured the influence of Reddit (more specifically, six subreddits with a substantial amount of news URLs: The_Donald, worldnews, politics, news, conspiracy, and AskReddit), 4chan, and Twitter on each other. We found that Twitter does have heavy influence on the spread of fake news, confirming concerns of other researchers and lending credence to government investigations. However, it does not exist in a vacuum, and is subject to the influence of other, lesser known “fringe” communities. More specifically, The_Donald and /pol/ are responsible for around 6% of mainstream news URLs over 4.5% of alternative news URLs on Twitter. Keeping in mind the relative size of the communities (Twitter is several orders of magnitude bigger than 4chan or any particular subreddit), these findings are quite striking.

Our work is a first step toward rigorously measuring the spread of fake news and the influence of social media, but much is left to be done. We now know that these dangerous fringe communities are not confined and we cannot study them in isolation, for example, just recently misinformation from 4chan related to the Las Vegas shooting spread across the Web. Considering the increasing awareness of the impact fake news has had in influencing referendums, elections, and public opinion in general, we expect an increase in funding research trying to address it. To that end, we believe there are several specific areas that should be looked into. Machine learning models to automatically gauge the veracity of content should take into account its source and propagation path. This, of course, requires discovery and monitoring of multiple communities on the Web, which comes with a host of additional challenges. Finally, we think the research community should continue to build up our understanding of how this content is created; a deep enough understanding could allow us to adapt the strategies of bad actors as a tool against them. It’s time to fight fire with fire.