However, Tor hidden services as originally implemented did not take full advantage of parallel processing, whether from a single multi-core computer or from load-balancing over multiple computers. Therefore once a single hidden service has hit the limit of vertical scaling (getting faster CPUs) there is not the option of horizontal scaling (adding more CPUs and more computers). There are also bottle-necks in the Tor networks, such as the 3–10 introduction points that help to negotiate the connection between the hidden service and the rendezvous point that actually carries the traffic.

For my MSc Information Security project at UCL, supervised by Steven Murdoch with the assistance of Alec Muffett and other Security Infrastructure engineers at Facebook in London, I explored possible techniques for improving the horizontal scalability of Tor hidden services. More precisely, I was looking at possible load balancing techniques to offer better performance and resiliency against hardware/network failures. The focus of the research was aimed at popular non-anonymous hidden services, where the anonymity of the service provider was not required; an example of this could be Facebook’s .onion address.

This approach can work for popular hidden services because, with the large number of clients, some will be using the descriptor most recently uploaded, while others will have cached older versions and continue to use them. However my experiments showed that the distribution of the clients over the hidden service instances set up in this way is highly non-uniform.

I therefore ran experiments on a private Tor network using the Shadow network simulator running multiple hidden service instances, and measuring the load distribution over time. The experiments were devised such that the instances uploaded their descriptors simultaneously, which resulted in different hidden service directories receiving different descriptors. As a result, clients connecting to a hidden service would be balanced more uniformly over the available instances.

This provided an adequate level of load distribution, and although the distribution was still not split evenly, performance was greatly improved. The figure below shows a comparison between experiments using 1, 2, 3 and 6 hidden service instances, measuring the time it takes to repeatedly download 1MB of data. By increasing the number of hidden service instances the time taken for all downloads to complete falls dramatically. 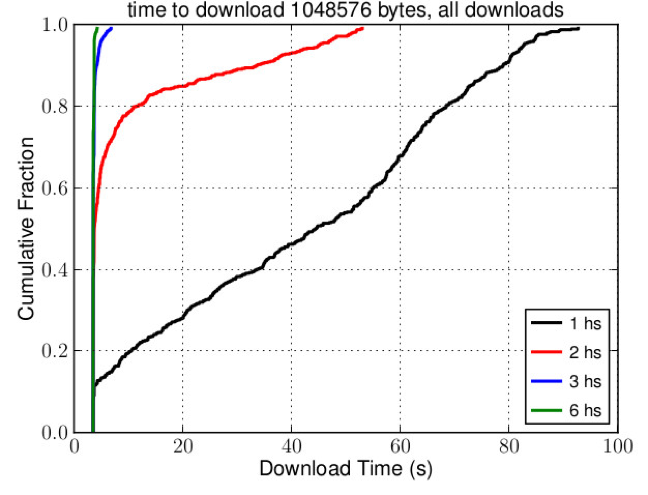 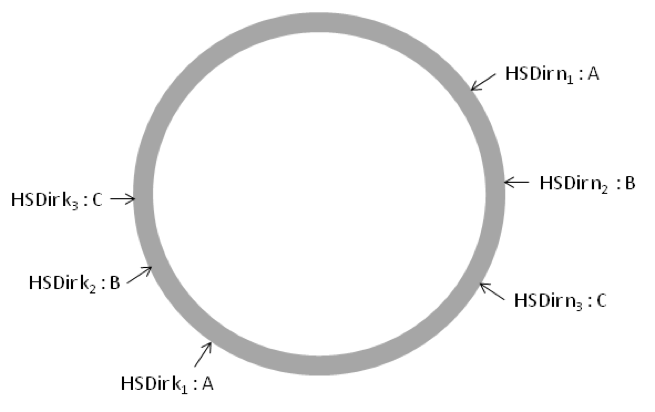 This new approach allows for up to six hidden service instances to be utilised, however it brings up the issue of how to best schedule the upload of hidden service descriptors. For simplicity during the experiments, the mix of selected descriptors was uploaded immediately after any of the instances republished theirs.

The solutions described have the potential to work well, but still require improvement and testing. Further details on the approach and the evaluation I performed can be found in my MSc thesis.