Not only do contactless cards allow some transactions without a PIN, but the data can be stolen from the card and, by extension, potentially money from any account linked to it, just by brushing past someone near enough to trigger the contactless chip into transmitting. 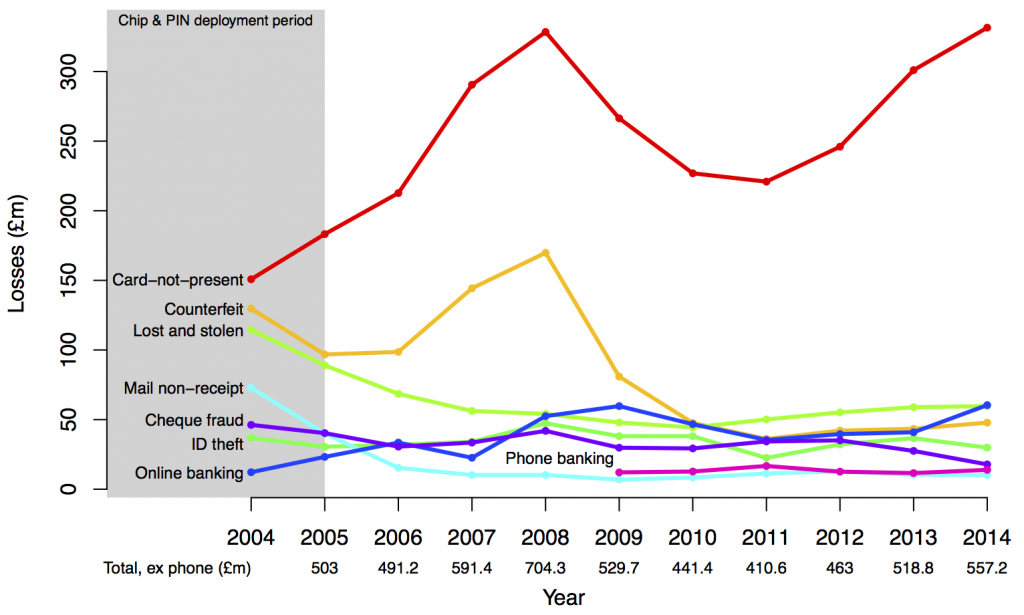 Fear of fraud versus potential for profit

So why are some banks issuing chip cards which don’t support PIN verification at all, leaving customers to sign for transactions instead? Why has the US been so slow to roll out Chip and PIN and why have UK banks actually decreased security for contactless cards? All three decisions are driven by, perhaps unsurprisingly, profit.

The share of transactions that card issuers take (the interchange fee) depends on the country and type of transaction. In the US, a lower fee is charged for PIN transactions than for those verified by signature. Since the fee is paid by merchants to the card companies and banks, that explains why merchants upgraded their terminals to support Chip and PIN long before the US banks started issuing chip cards. Encouraging banks to start issuing cards is being handled the same way: as of October 2015 if the merchant’s terminal which accepts a fraudulent payment supports Chip and PIN but the card doesn’t, the card issuer pays for the cost of the fraud. If the merchant’s terminal doesn’t support Chip and PIN but the card does, the merchant pays.

Contactless cards are being promoted because it appears they cause customers to spend more. Some of this could be accounted for by a shift from cash to contactless, but some could also stem from a greater temptation to spend more due to the absence of tangible cash in a wallet as a means of budgeting.

Greater convenience leads to increased spending, which means more fees for the card issuers and more profit for the merchant – this is the real reason why the PIN check was dropped from contactless cards. The risk of fraud is mitigated to some degree by limiting transactions in the UK to £20 (rising to £30 in September), but it’s been demonstrated that even these limits can be bypassed.

Card fraud involves a very large amount of money – £479m in 2014 in the UK – and affects many millions of people. In a EU-wide survey, 17% of UK internet users said they had been the victim of credit card or online banking fraud – the worst in the EU. Some of the costs of fraud are borne by the merchants. Others are passed to the victim because the Payment Services Directive allows banks to refuse to refund customers if they can’t identify a more likely cause for the fraud than customer negligence.

However, even if all the costs of fraud were paid for by the card companies, the cost they would bear would only make up 0.075% of the value of card transactions. This sum they could comfortably pay for from the interchange fees they charge on these transactions, currently set at 0.7% of the transaction value – nearly ten times larger than the costs of fraud.

While fraud statistics in the US are not as systematically collected as in the UK and Europe, fraud there is estimated at around US$10 billion a year (about half the worldwide total). As a proportion of transaction volume, fraud rose 0.05% in 2007 to 0.1% in 2014. Still, Chip and PIN in the UK only temporarily disrupted the rising trend of card fraud until criminals focused on softer targets such as using UK cards in the US. Once this option is unavailable through the introduction of Chip and PIN to the US, the long-term effects are hard to predict.

This article was originally published on The Conversation, written by Steven J. Murdoch, UCL.